You are here:
by AshleyRossiter in Events, Fashion, General. Posted July 14, 2014

When top stylist Katie Grande and Marc Jacobs ran an open casting for their A/W fashion campaign via Instagram, the response was certainly something to consider, with some 70,000 boys and girls posting their photos in the hope that they would make it to the final casting.

Out of the thousands, thirty finalists were then whittled down to just nine who were then flown to New York for the campaign.

And it got us thinking how social media is also having a big impact in the equestrian world, however perhaps not in such a positive light, as two governing bodies introduce new guidelines: British Show-jumping and British Eventing, according to Horse & Hound are both urging riders to “think before they post” and British Dressage are apparently already “discussing the idea of enhancing their code of conduct” on social media rules.

So, whilst it might be some time before we have our own castings for models (equine or human) via Instagram or get to fly them out to New York for a shoot (maybe a trip to Newmarket?), it seems the impact of social media is as newsworthy as it is as powerful. 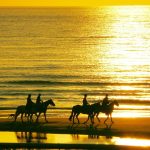