Horses Can Read Our Body Language

“Well, you don’t say?! ‘Horses Can Read Our Body Language’?” Knowledgeable equestrians will probably say after reading that title, stating that they’ve known this fact for years. However, The MirrorMe Equine PR London Team were still intrigued to read the new study showing that horses can tell the difference between dominant and submissive body postures in humans, even when we don’t know we’re doing them.

It’s well known that dogs can read our body language, but the Equine PR London team here were intrigued to learn this news released by researchers at the University of Portsmouth and the University Of Sussex. The Study initially looked at 45 domesticated horses but eventually whittled down to 30 horses (22 geldings and 8 mares of varied ages.) The owners confirmed that all horses were comfortable being handled by unfamiliar humans and had no known eyesight problems.

Ten adult females, dressed in dark clothing with their faces covered to eye level ensuring the horses could not pick up on facial cues, adopted two classic posture takes on dominant and submissive. Each horse was tested individually with the same handler and then undertook warm-up trials to encourage the horses to approach the ‘demonstrators’ in the first instance. After approaching, each horse was rewarded with a carrot.

Our Equine PR London team and anyone who knows horses would agree that putting anything odd in a familiar surrounding will always be met with concern or interest by a horse, so putting this initial step in place before the final trial would have been vital! It may be of interest to note that, at this stage, some horses did not reach the criteria in all of the ten warm-up trials and therefore didn’t progress to the test. Again, as horse owners, we all know that not all horses are the same, some are more trusting of our leadership than others, especially when it comes to introducing anything that might be viewed as ‘scary’ or ‘out of the ordinary’. In a mini poll here in the office, we concluded that we believe out of four, only one of our horses would have probably passed the warm-up phase (Time for us to work on our relationships with our own horses, we think!!)

In the test phase, the horses were not given a carrot as a reward and were filmed with the conforming data that was later analysed. In the tests, horses performed 90 approaches to submissive postures and 27 approaches to dominate postures, reflecting that horses are significantly more likely to approach a submissive stance over a dominant one.

The study then went on to discuss the fact that this could be explained by either their natural avoidance of dominance, as larger postures frequently go hand in hand with threatening contexts, or an attraction to submission, as this is seen as a signal of compliance or appeasement. It concluded that only two postures were adopted in this initial test, so the results cannot be generalised across all stances. However, the tests were a good starting point in enhancing our understanding of communication between horses and their handlers and trainers.

So while a knowledgeable horseman (or woman) will read the report and agree, MirrorMe’s Equine PR London team think that any study that raises greater awareness of our relationships with these fantastic animals is a plus. If this study results in less than expert equestrians become further educated through these findings, this can only mean good news for all our Equine friends.

If you enjoyed this blog, you might enjoy reading Bonding With Your Horse written by the expert Equine PR London team here at MirrorMe.

5 Of Our Favourite Pro Schooling Exercises To Try With Your Horse August 3, 2020
How To Prepare Your Horse For Your First Competition August 24, 2020
The Top 10 Best Luxury Mother’s Day Gift Ideas March 16, 2020 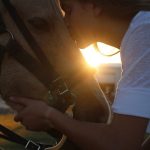