The Future Of Publishing

You are here:
by AshleyRossiter in Editorial, Fashion, Trends, Uncategorized. Posted June 5, 2014

I read a really interesting interview recently with Elle UK Magazine’s Editor-In-Chief Lorraine Candy who was commenting about the future of publishing in print form.
When asked to make a prediction about where publishing was heading, she replied:

“I think print will always be the mothership. It will always be the thing that women want to sit down, lean back and relax with. You’re paying for an edit you can’t get anywhere else. You can go online and see thousands of pages of merchandise. You can see loads of sites showing you how to put it together, but it’s not the ELLE team. They’re not shooting it with amazing photographers who’ve shot it on the world’s best models. They haven’t seen these pieces before they’ve even gone anywhere near the store or the catwalk. That edit is what you’re paying for. That will always exist because women will always want that. How and where they buy it will be different, because they’re not always going into news agents, supermarkets or traditional bookshops to buy magazines anymore. I think we’ll be selling magazines to them a lot more online. There will be a much more integrated, collaborative response and approach to everything, which I think will be really exciting. And I think it will be a very modern and playful world, where you’ll be able to read, shop, watch, and share. We have huge communities around ELLE that are interested in books, films, music and things and we target them in a very specific way. The core for them is fashion, but we say, “We know you’re interested in all these other things, so our content will be shaped by your interest in these things.”

My thoughts also echo this sentiment because whilst we don’t have super models and within equestrian magazine publishing, perhaps the most exotic location will be as far afield as Oxfordshire, we still have super ‘equine’ models, amazing photographers and an array of A list celebrity riders who the masses still want to see and read about and I don’t believe this will ever change.
I agree with Candy that people’s buying habits may lead to an increase in digital issues as oppose to print, but for someone like me to sits in front of a screen all day long most days, the luxury of sitting down with a nice glossy magazine will never lose it’s allure! 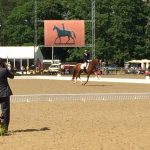